Now that we’ve reached the penultimate episode of WandaVision, we expect you know the drill: just like last week, you will want to navigate away from your computational service’s screen if you haven’t seen the eighth episode of WandaVision, “Previously On,” which was released for streaming today, on Friday, February 26th, 2021. If you’d like something spoiler-free to read, consider this review of Flora & Ulysses.

Wow! What an episode! In addition to going full-on into the witchy backstory of Agatha Harkness, this week’s WandaVision also gave us our first glimpse of a mysterious new character: behold, an all-silver (or is it white) version of The Vision! During the mid-credits scene, we witnessed S.W.O.R.D. activating what appears to be a silver version of The Vision. Just what could be afoot with S.W.O.R.D.’s sinister machinations? As usual, there’s some insight from the comics that might make things a little bit more clear!

Many of the plot beats fully revealed in “Previously On” are incredibly similar to a 1989 West Coast Avengers story arc, “VisionQuest,” which can be found in West Coast Avengers issues #42 – #46 by John Byrne, Mike Machlan, Bill Oakley, and Paul Becton. In the first issue in this story, Wanda and Vision are happily married when Wanda awakes one moment to find that Vision has vanished. The story eventually leads to the discovery that Vision has been dismantled by an international coalition of governments who viewed Vision as a threat to security. Just like in “Previously On,” Wanda is forced to confront the gruesomely dismantled remains of her synthezoid husband. 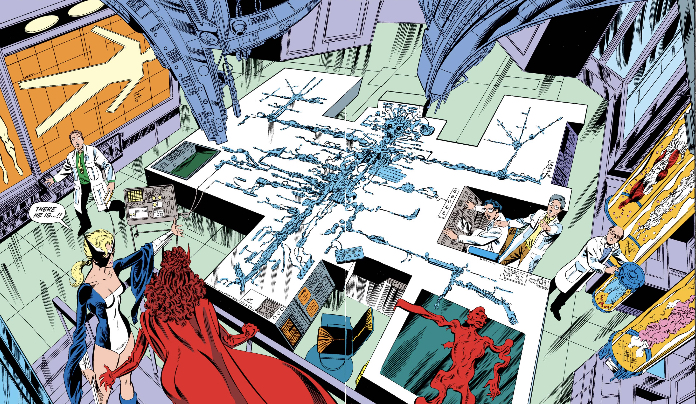 In spite of resistance from those who have kidnapped him, Wanda and the rest of the team are able to escape with the remains of The Vision. Thanks to the assistance of Hank Pym, they are able to reactivate Vision. However, when they do so and Vision returns, he is not as Wanda remembers him. While it is not a matter of memory – he still recognizes the other Avengers – he no longer possesses the friendly and familiar personality of The Vision. Where does this arc lead to in the comics? Well, it’s exciting and could mean big things for the Marvel Cinematic Universe. We’ve already made some speculations about what to expect on Marvel Blog, so check out this Immortus article for more info on what might come next!

But what’s going on in Westview? It seems as though The Vision we’ve been watching week-to-week was actually created by Wanda. But if that’s the case, then that means that Wanda actually created vibranium – yeah, you heard me right.

Check out WandaVision Episode 5, in which Dr. Darcy Lewis, played by Kat Dennings, notes that Director Hayward, played by Josh Stamberg, has been tracking the decay signature of vibranium inside the Hex. Will the double Visions be brought into focus? Is Agatha an enemy or an ally? We’re going to be on the edge of our seats the whole week! Thank goodness we have comics to keep us occupied as we wait for the WandaVision season finale next week.