Falcon & Winter Soldier: The 1-2-3 of THUNDERBOLTS!

Greetings, Marvel Blog True Believers! Have you had a chance to see the third episode of The Falcon and the Winter Soldier, “Power Broker”? It was released for streaming on Disney+ on Friday, April 2nd, 2021.

If you haven’t had a chance to check out the episode yet and you want to stay away from spoilers, then click away from the article now!

Zemo and Bucky, together again…

Bucky Barnes (Sebastian Stan) and Baron Zemo (Daniel Brühl) already have something of a history in the Marvel Cinematic Universe.

In 2016’s Captain America: Civil War, the two characters ended up intertwined when Zemo used the Winter Soldier’s Hydra programming to manipulate him into attacking Steve Rogers (Chris Evans) – just a reminder: Zemo loathes Super Soldiers so if you are one, don’t accept his airplane food. In spite of their dubious history, in “Power Broker,” we see Bucky spring the supervillain from a German prison because Zemo’s desire to eradicate Super Soldiers aligns with Bucky and Sam’s current goals in The Falcon and the Winter Soldier. However, the characters – Zemo, Winter Soldier, and Smiling Tiger – have a shared team in their Marvel Comics history… 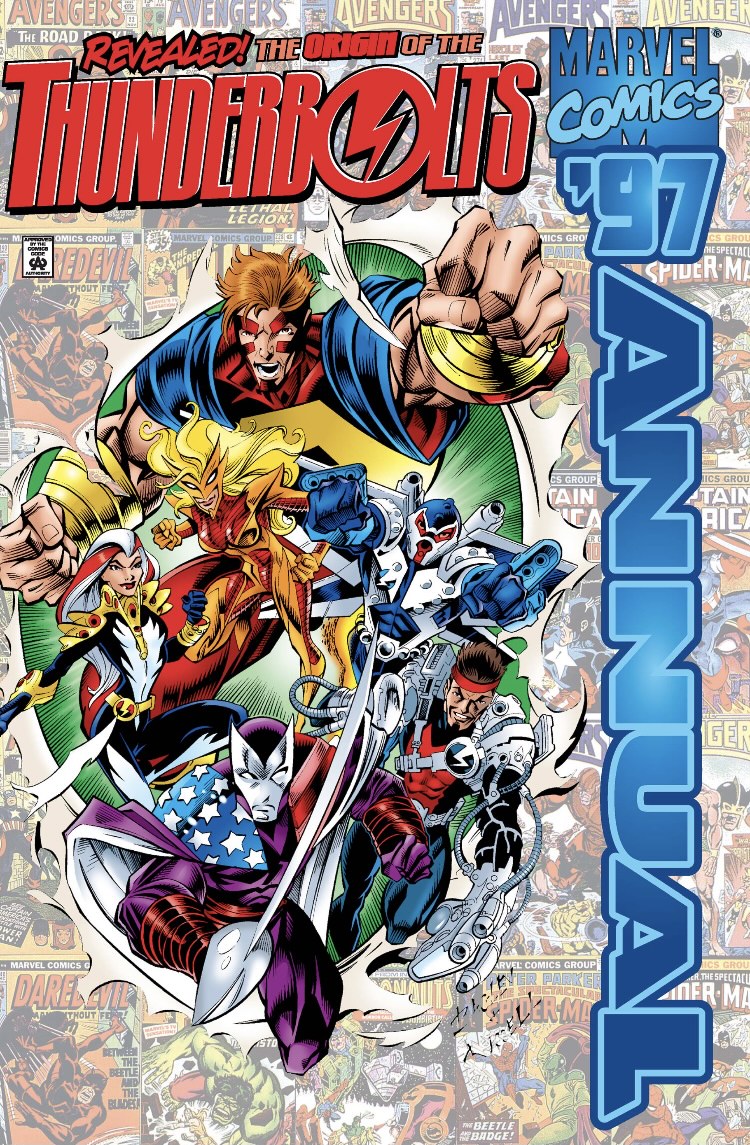 The Thunderbolts had originally formed as a reformation of the Masters of Evil, an earlier team of supervillains helmed by the Baron in a purple helmet, Zemo. However, in the wake of the apparent death of the Avengers and the Fantastic 4 at the hands of Onslaught, Zemo resolved to rebrand the team as  superheroes, not supervillains, in order to fill the void left by the late defenders of the 616. Over the course of the story, most of the team members found that they preferred to be heroes rather than villains, and many of them retained their more heroic code names (and moral codes) after the Avengers and the Fantastic 4 had returned.

In “Power Broker,” as Sam Wilson (Anthony Mackie) enters Madripoor, he must disguise himself by adopting the identity of Conrad Mack, also known as the Smiling Tiger. In the panels of Marvel Comics, this character is also a member of the Thunderbolts!

Madripoor from The Falcon and the Winter Soldier. Photo: Marvel Studios Later in that story arc, the Folding Circle steals a quinjet from the Avengers. In one panel, you get a glimpse of the Smiling Tiger fighting with the other members of the Thunderbolt’s beta squad on the streets of Los Angeles, California.

Years later, the Winter Soldier himself would head a Thunderbolts team all his own! After the events of Avengers: Standoff, Bucky flees with the sentient Cosmic Cube entity known as Kobik, forming a new team in Thunderbolts #1 (2016) by Jim Zub, Jon Malin, Matt Yackey, and Joe Sabino. This series took place during a complicated time period for Captain America, as Steve had been replaced with a duplicate who was secretly loyal to Hydra, putting him in opposition to Bucky. A Captain America who was opposed to the Winter Soldier… now where have I heard that before? While Zemo does not appear in the first issue of this 12-issue Thunderbolts run, he does return in a subsequent issue, where he issues an ultimatum to the members of his former team: join Hydra or be destroyed! The Once & Future Thunderbolts

Will we be seeing more members of the Thunderbolts on The Falcon and the Winter Soldier? We’re on the edge of our seats, True Believers! Let us know what you think in the comment section.