Get Down, America! HOWARD THE DUCK 4K UHD in July

WAUGH! In a post made to Twitter by the “Dawn of the Discs” account on Monday, April 26th, 2021, it was revealed that Howard the Duck, the 1986 live-action movie directed by Willard Huyck, will be released by Universal Studios on 4K UHD in July 2021.

Coming to 4K UHD in July from @UniversalPics !

Trapped in a World He Never Made

The Howard the Duck movie is one of the earliest big-screen Marvel movies, Marvel Blog True Believers! While the flick, which features George Lucas as a producer, has something of a infamous reputation, it’s actually very faithful to its source material (and we love it for that)! Howard – sans his beautiful sidekick, Beverly, played by Lea Thompson in the film, who doesn’t appear in any of the comics listed here – was first introduced in Adventure into Fear #19 (1974) by Steve Gerber, Val Mayerik, Sal Trapani, Art Simek, and Stan G. In Howard’s next appearance in Man-Thing #1 (1974) by Gerber, Mayerik, Trapani, John Costanza, and Dave Hunt, Howard falls while traversing a path that lies outside reality, vanishing from this narrative… But the Marvel Multiverse wasn’t done with Howard yet! In Giant-Size Man-Thing #4 (1975), we catch up with Howard as he continues to fall… In the story “Frog of Death” by Gerber, Frank Brunner, and Tom Orz (with “The Good Duck Artist” Carl Barks credited as “Spiritual Guide”), Howard eventually lands in the universe designated 616! Howard goes on to face another Earth-monster in the Giant-Size Man-Thing (1975) #5 story “Hellcow” by Gerber, Brunner, Tom Palmer, Annette Kawecki, and Glynis Wein. Finally, Howard was ready for the big-time, graduating to his own solo series with Howard the Duck (1976) #1 by Gerber, Brunner, Steve Leialoha, and Costanza. The series ran for thirty issues and cast a long shadow, as it is still regularly referenced today! 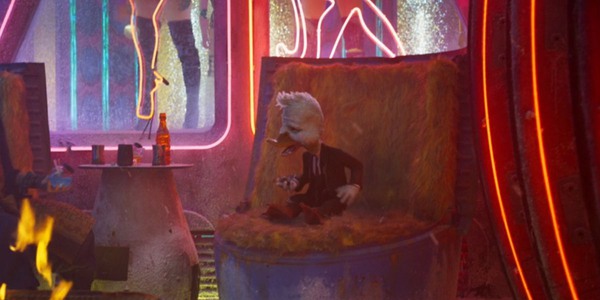 Howard the Duck (voiced by Seth Green) in Guardians of the Galaxy Vol. 2. Photo: SyFy

Plus, while we can’t be certain, we believe that you can see a glimpse of Howard in this still from the upcoming What If…? animated series on Disney+, suggesting we might get to see the foul feathered fowl interact with none other than Chadwick Boseman’s T’Challa. And there is one incarnation of Howard we almost met: the one who would have starred in the Hulu adult animated series from Kevin Smith. One of four shows meant to culminate in a crossover called “The Offenders,” the planned Howard the Duck animated series is one of the apparent casualties of Marvel TV being folded into Marvel Studios near the end of 2019. However, one series from that era has survived, and you’ll be able to stream on Hulu it in May 2021: Marvel’s M.O.D.O.K.! Will you be picking up a HD copy of Howard the Duck when it arrives in July? Have you read all of the issues available on Marvel Unlimited? Marvel Blog is waiting to hear from you! Let us know in the comment section.