Disney+ has breathed new life into the MCU with several amazing streaming series! Now Hasbro is celebrating them with the Marvel Legends Khonshu Wave! The figures included in this wave span from the series What If…?, Loki, and, Wandavision!

From Loki, we have two magnificent figures in Classic Loki and He Who Remains. From Wandavision we have special agent Jimmy Woo. From What If?… we have Zombie Scarlett Witch, Zombie Iron Man, Red skull, and Howard the Duck. Each figure comes with a piece to build Moon Knight’s Khonshu! 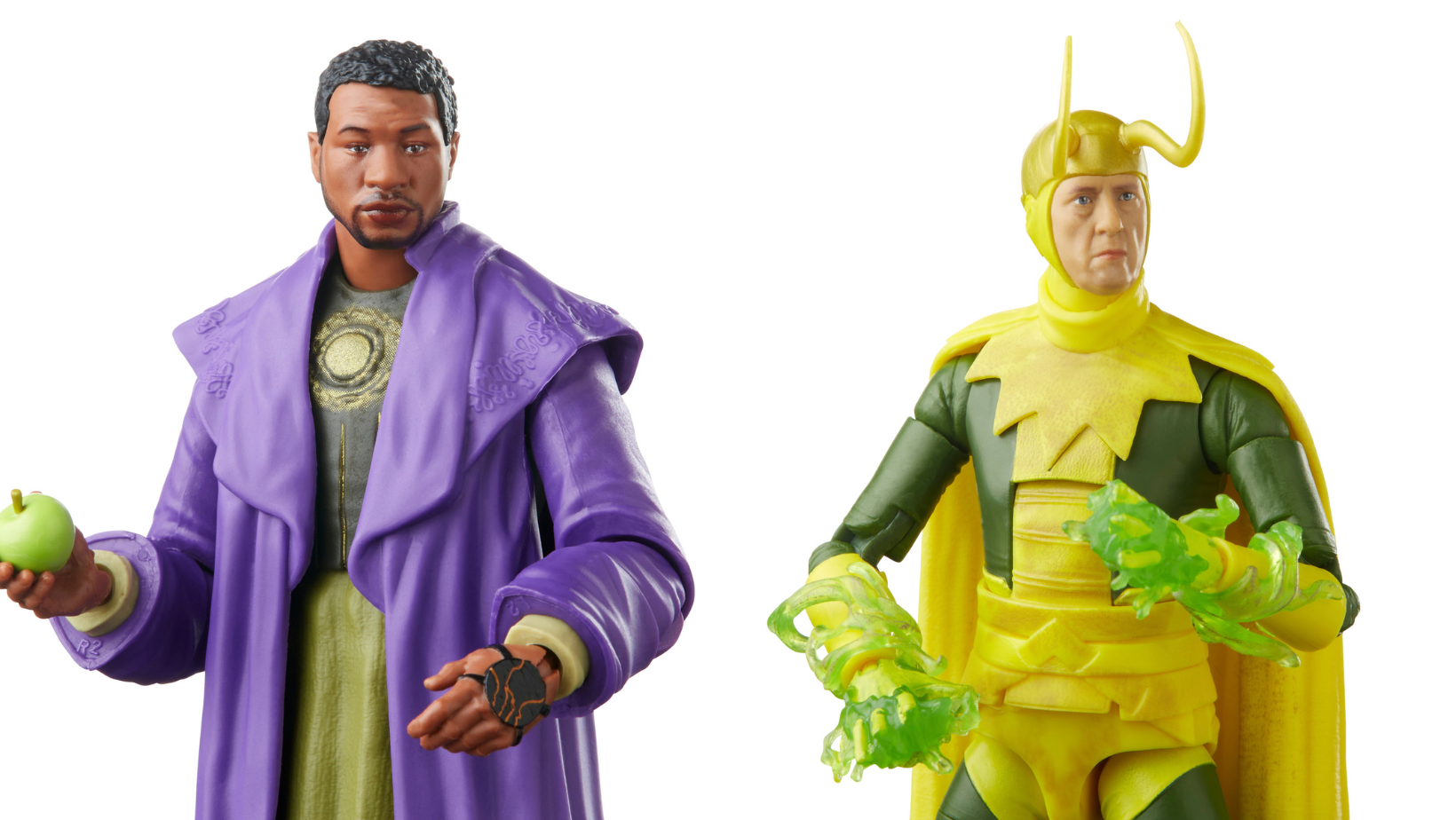 The first two figures in this set, and my personal favorite, are He Who Remains and Classic Loki! One of the most memorable episodes of Loki was episode 5 which featured about a dozen different Loki variants, among them was a much older Loki draped in his classic comic garb and played by actor Richard E. Grant.

The figures do a superb job of recreating the likeness of both Jonathan Majors who plays He Who Remains and Richard Grant who plays Classic Loki. The figures are incredibly poseable and feature bright vibrant colors, each comes with an accessory as seen in their respective episodes. What If?… featured a myriad of interesting characters and scenarios throughout the 9-episode season, one of the most fascinating was the zombie episode! Featuring zombified versions of everyone’s favorite heroes. Zombie Wanda and zombie Iron Man are both getting the figure treatment in this Khonshu wave.

Zombie Wanda and Iron Man are eerily ghoulish, the skin tones are done in a macabre blueish gray giving the appearance of decaying flesh. The faces on these figures are what make them truly great. Tony is missing his nose most likely from decay and Wanda looks completely menacing eyes bloodshot and mangled hair! The last two figures from the What If?… series are Red Skull and Howard The Duck! Red Skull appeared in episode 1 as Captain Carter’s primary foil, once again attempting to use the tesseract. The figure excels in keeping Skull’s menacing red visage and he is even equipped with a small tesseract! The final figure in the wave comes from Wandavision, the fan-favorite special agent Jimmy Woo! A former SHIELD agent, Woo was originally tasked as the parole officer of Scott Lang. After Shield’s destruction, he transferred to the FBI where he worked with SWORD to figure out what happened in Westview, New Jersey.

The figure does Jimmy Woo great justice, capturing his facial likeness down to his smirk. Little intricate details adorn the figure such as Woo’s FBI badge along with various parts of Woo’s jacket. Collecting each of the figures allows you to build the Egyptian god of the moon and the master of the Moon Knight Khonshu. Khonshu was Egyptian God who made Marc Spector his avatar to combat Arthur Harrow as Harrow was seeking to resurrect Ammet. All figures are done on a 1/6th scale and include incredible points of articulation allowing collectors or kids to pose them in just about any way they want.

The Marvel Legends Khonshu Wave is currently available for Pre-Order at a variety of different online retailers for around $24.99! These figures are excellent additions for collections or the child at play!