Well, Marvel Blog True Believers, you didn’t think we’d be watching the first Spider-Man movie starring Tobey Maguire (who might be returning to the big screen Marvel Universe) without watching the second, did you? The second movie in the Sam Raimi Spider-Man trilogy is at least as good as the first one, and I can think of eight reasons why: Dr. Otto Octavius (Alfred Molina)! A superhero’s life is often defined by the villains he faces in battle. In Spider-Man 2, we learn that the life-defining moments of the infamous webcrawler are no different – yes, this is true no matter how much Peter Parker would rather spend all of his time impressing Mary Jane Watson (Kirsten Dunst).

From the first moment that Dr. Otto Octavius appears on screen, he begins to steal the show, acting like the “good-willed” mogul he isn’t (unless, performing dangerous experiments that are one mistake away from vaporizing Manhattan is something good scientists do).

Molina’s Otto Octavius creates four powerful tentacles, each with cyber-intelligence of its own, that are controlled by a computer chip in the metal spine at the base of the arms. Although the chip is supposed to stop the tentacles from overriding the good doctor’s orders, after it’s destroyed during an experiment, Doc Ock is created.

The new Doc Ock is a fusion of man and machine, leading to one of the best scenes in Spider-Man 2, the Doc Ock operation room scene. Molina really kicks into high gear as Doc Ock with the hospital scene.

In the sequence, which channels Evil Dead, we see Ock’s powers awaken and completely destroy a hospital operating room. This horror-style event heralds the tone that Ock will possess throughout the rest of the Spider-Man 2 movie: a true presence who seems like he might crawl right through the screen and throw the TV out the window!

They’re coming to get you Spidey. Photo: Sony Pictures

While every scene Ock appears in is amazing, one other act in particular must be mentioned: the train fight! If you’ve seen this battle once, you will surely remember this epic action sequence – it’s one of the best train battles of all time! 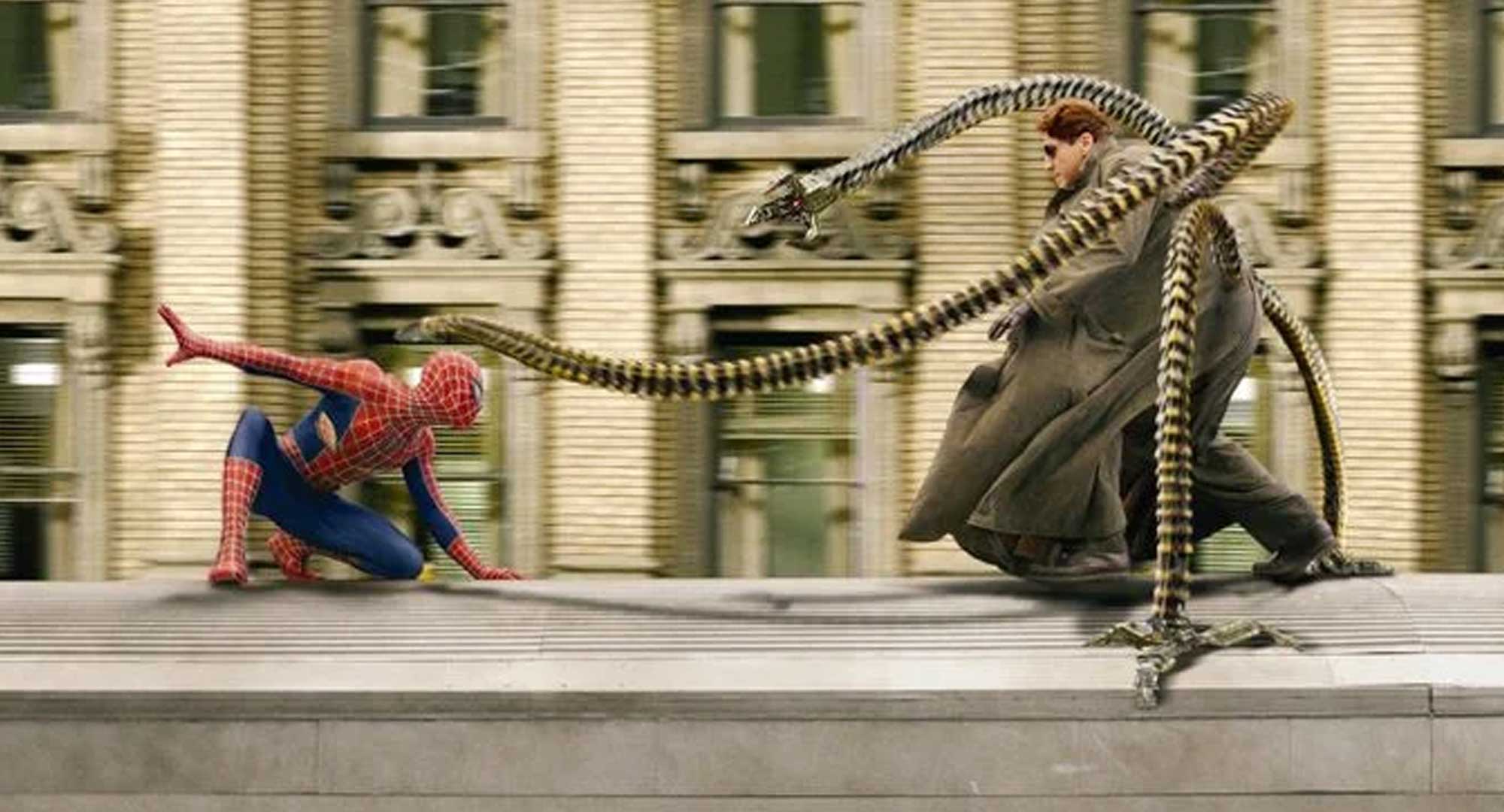 Plus, the good news is, we’ll soon be seeing more of Molina’s Doc Ock in the Marvel Cinematic Universe! The other majorly awesome part of Spider-Man 2 is the score. Composed by Danny Elfman, who will be working with Raimi again on the upcoming Doctor Strange in the Multiverse of Madness, the music in Spider-Man 2 is classic, and you’ll be humming it well after the movie has ended. Plus, because Elfman left work on Spider-Man 3 part of the way through production (due to an explosive interview the composer gave about working on Spider-Man 2), this is the final movie in Raimi’s Spider-Man trilogy to exclusively feature his music. Along Came a Spider…

For many comic book fans, not Elfman but including Roger Ebert, Spider-Man 2 defines the genre to this day. The movie demonstrates something that Marvel Studios understands well, especially in the new Disney+ series, it’s not just about the superpowers but the humans behind them. Spider-Man 2 believes in its story in the same way serious comic readers believe, when the adventures on the page express their own dreams and wishes. It’s not camp and it’s not nostalgia, it’s not wall-to-wall special effects and it’s not pickled in angst. It’s simply and poignantly a realization that being Spider-Man is a burden that Peter Parker is not entirely willing to bear.

Now, if you ask me, that’s a pretty stellar review for a movie starring the webcrawler from THE movie critic himself. Personally, I hope to see Raimi bring the exact same dedication to decades of Marvel Comics tradition in the upcoming Doctor Strange sequel (with a hint of horror).

When was the last time you got a chance to watch the Raimi Spider-Man trilogy, Marvel Blog True Believers? Which of the villains is your favorite? Which one of Bruce Campbell’s three cameo roles do you prefer? Let us know what you think in the comment section, Marvel Blog True Believers!