REVIEW: Walk the Lockjaw in Spider-Bot #7

In Spider-Bot #7 by Jordan Blum, Alberto Alburquerque, Dono Sanchez-Almara, and Clayton Cowles, we get a story that sees the eponymous android undertaking one of the most difficult chores of all: he has to walk the dog! What’s the big deal, you might be asking? Well, it’s sort of a different proposition when the dog in question is the interdimensionally-hopping Lockjaw! 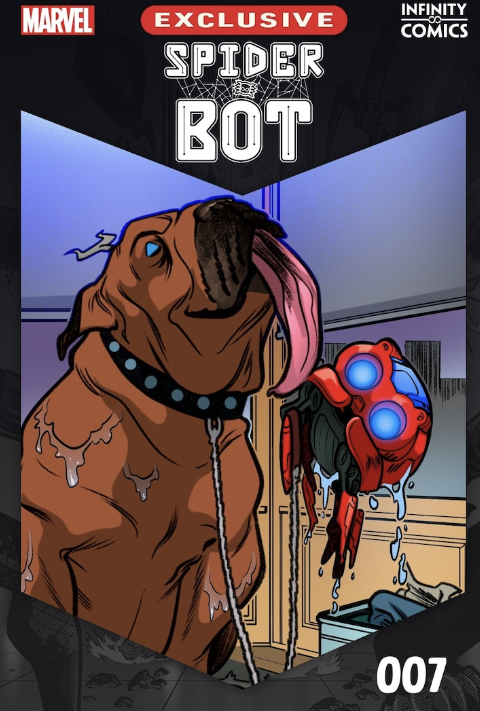 This Infinity Comics episode, which is available to read on Marvel Unlimited right now (along with the previous six highly recommended episodes), delivers on everything we’ve come to expect from this outstanding series: hilariously comedic moments that pull from the deepest corners of Marvel Comics continuity to completely catch you off guard and leave you chuckling for the rest of your Friday! We all saw Into the Spider-Verse, I agree with Spider-Bot. Photo: Marvel Unlimited.

The premise sees Spider-Bot hanging out with Miles Morales (which is going great, as the pair agrees that Miles has much better taste in music than Peter Parker, and you know what, if their respective movie soundtracks are any indication, that’s fair). But soon, fellow Champion Kamala Khan arrives and tells Miles that they need to head to Atlantis double-quick… and because Lockjaw can be a bit surly when it comes to trips he hasn’t planned himself, she says they need to leave the Inhuman canine behind as they execute their mission. Great set-up, right? But it’s even better than you think! That’s because this leads to Lockjaw pulling Spider-Bot through multiple Marvelous dimensions… which includes some absolutely fabulous cameos! I won’t spoil all of them, but I do have to reveal one: an appearance by one of my favorite Howard the Duck characters, HELLCOW! This is yet another incredible episode of one of my very favorite Infinity Comics, Marvel Blog True Believers. Please check this series out for yourself! You deserve it!

I have one final thought on this episode, Marvel Blog True Believers: I sort of wish it was an attraction at Avengers Campus! As much fun as Star Tours can be, I’d rather be hopping from one corner to the Marvel multiverse to the other with Lockjaw and Spider-Bot. Hey, Imagineers: somebody go hire Blum to write your next Marvelous Disney Parks endeavor!

Did you get a chance to read Spider-Bot #7 yet, Marvel Blog True Believers? Share your thoughts with us in the comment section!