REVIEW: A Fate Worse Than Death In EXTREME CARNAGE LASHER #1 Lashing All the Way

By now, we’re pretty familiar with the format of this ongoing event: each issue shifts to the perspective of another one of the Life Foundation Symbiotes as Carnage, now existing in the Symbiote Hive, works his malignant machinations and Eddie Brock (Agent Anti-Venom) does his best to thwart him. My favorite part of the story was the way that Lasher (corrupted by Carnage and not really in control) slithers into an elderly man with Alzheimer’s. This storyline is completely horrifying: not only is the idea of how you’ll be treated if you get diagnosed with Alzheimer’s itself scary, but the comic leans into the horrific elements to emphasize the terror of an all-too realistic situation (just like the best novels by Stephen King). This story is all the more brutal because Lasher the symbiote doesn’t want to be a part of the violence! He tries to warn the man not to listen to Carnage, but Carnage offers the sick individual a Faustian bargain: help him and get his memories back. Can you blame him for giving in? No… and that’s what really ratchets up the horror! 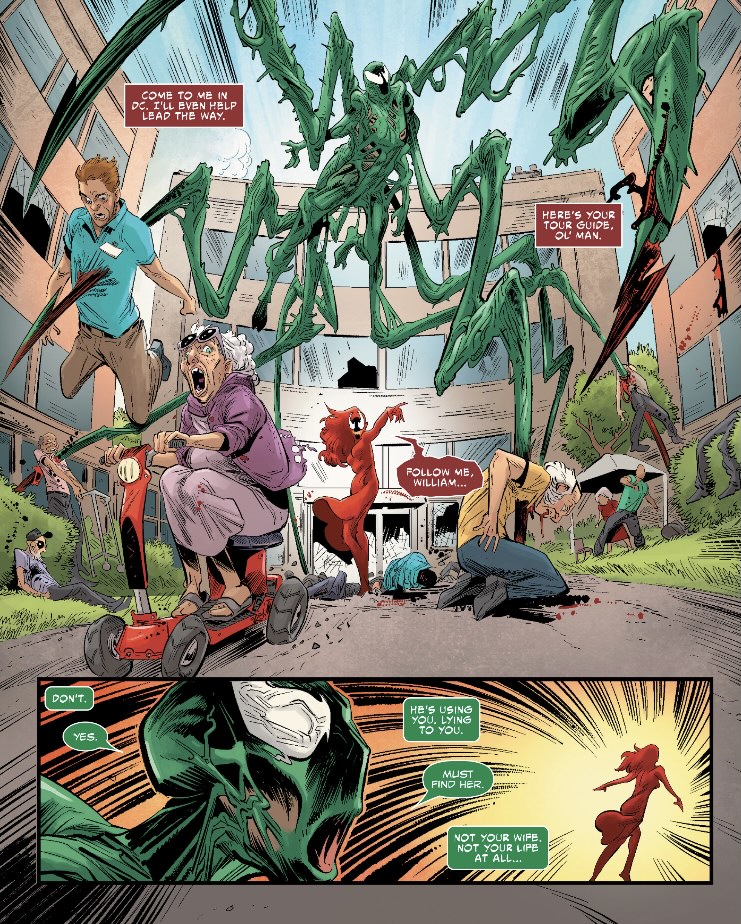 The Sound of Silence

Meanwhile, we get more of the storylines that have been started in previous issues, as well. First of all, we see some more of the Friends of Humanity, who are surely going to be integral in the endgame of this event. And we also get more of the story of what’s happening with Scream and Andi Benton! As the most devoted Marvel Blog True Believers are already aware, I am a huge fan of this character and have been on the edge of my seat to know what would be around the next turn for them… and let me tell you: this issue delivers with exactly the kind of action I was hoping to see!

This event has been a ton of fun, Marvel Blog True Believers, and I can’t wait to see what happens next! I was a little concerned I might not enjoy this one as much, as I am not as familiar with the characters, but these issues have done a stellar job of grabbing my attention and making me care about the heroes (and less-than-heroes) involved in the story! And there are some stellar cameos… Photo: Marvel Comics

Have you had a chance to pick up Extreme Carnage: Lasher #1? Which one of the symbiotes is your favorite? Let us know what you’re thinking in the comment section, Marvel Blog True Believers!